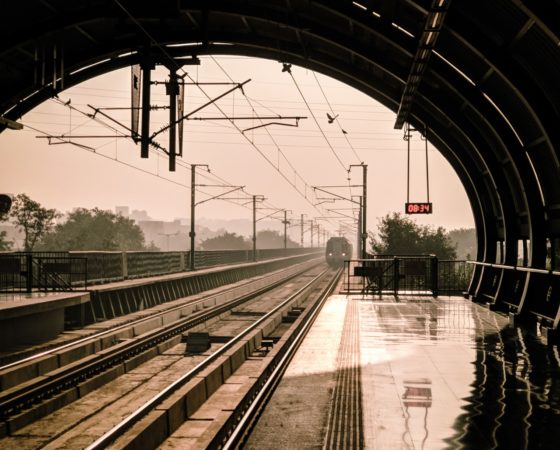 Once off the train, Travis decided to find the bathroom and see if he could somehow wash the smell of dog urine off his trouser. The now painful scratchy tag at his lower back was combined with a wet slap of cloth against his leg every time he took a step forward. He glared down at the dog as it skipped along beside him.

Despite the no-dogs-allowed sign outside the bathroom, the dog followed him in, and sat beneath the basin. Travis looked at the long row of sinks. None had taps. The Cape Town water crisis had resulted in the removal of all the public taps to avoid wastage and in their place was a small bucket of brilliant blue liquid. Travis bent over and tried to sniff the bottom of his pants. The pungent whiff of dog wee hit him in the face. He had to try and clean the pants. Lifting his leg up onto the basin, he leaned across and grabbed a handful of the blue waterless hand sanitiser. He dolloped the gooey liquid onto his pants where the dog stain lay and rubbed it vigorously. Leaning over to blow the liquid dry, the smell of detergent mixed with wee filled his nostrils. He retched and a faint blue smudge appeared on the chino pants leg.

“Freaking hell dog. This is even worse” said Travis to the dog as he lowered his leg back down, “Come here, looks like you’ve got a collar on. Maybe we can phone your owner and get you home. Maybe they have a car and can take me to town” he said as he reached towards the dog’s collar and drew the tag around. The dog pulled back, and Travis has to grab the dog’s collar again, swearing at the dog.

“Says your name is Sparky. That’s funny. You don’t look sparky to me” said Travis, turning over the disc, “and here’s the number. Hmmm. Ok, let’s get out of this place and I’ll phone your owner” said Travis, standing up straight and walking determinedly out of the station bathrooms, onto the streets of Muizenberg.

Outside the historical stone Muizenberg station, Travis walked into a nearby parking lot and pulled his mobile out of his pocket. He pressed the button to light up the screen and a red battery blinked at him twice and then shut down. Travis closed his eyes “Holly mother” he said. His mother’s voice rang through his head, “Not even you can stuff this up my boy”. He shoved the dead mobile into his pocket and shook his head. His mother and probably Uncle Ben were going to kill him.

He opened his eyes. The dog had barked its sad little yelp of a bark at him.

“You want to go home boy?” Travis asked the dog.

“Look, there’s a backpackers here, let’s go and use their phone to call your owner” said Travis as he walked to the entrance of the backpackers. He stood at the glass door until someone noticed him and then buzzed the security gate open.

“You can’t bring the dog in dude” said the dreadlocked door opener from behind the coffee counter.

Travis looked down at the dog, “Stay here boy”.

The phone number on Sparky’s tag rang and didn’t go to voicemail. Travis eventually gave up after the third try. “No luck hey bro?” asked the barista of the backpackers front office.

“No” said Travis, looking out the glass doors to Sparky. The dog panted non-stop, tongue out.

“Well, like, who knows man. The dog could be really loved. So, like, maybe take him to a vet or something. They have those chip-scanner things?” advised the barista. Travis sighed. He was already going to be late and he may as well find the dog a safe place. Checking if he had a chip sounded like the right thing to do.

“Thanks hey” Travis said as he left the backpackers. He could possibly still not completely screw up this opportunity. All he had to do was get the dog to a safe place and then he could buy another ticket and catch the next train.

“Come on boy. Let’s go to the vet. I’ve seen one in the village” explained Travis.

Sparky stood up as Travis walked towards him, following obligingly, his tail wagging in the air as he went.

This was first published in the Billboard Magazine in May 2019